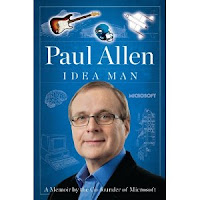 I recently went to Seattle’s Town Hall to hear Paul Allen being interviewed by Todd Bishop from Geekwire. Mr. Allen, who is usually a very private person, has been traversing the country, appearing on Sixty Minutes, etc. to promote his memoir, Idea Man.

In the ladies restroom before the program, a young woman commented, “I don’t know what I’m doing here. Allen is always so awkward and uncomfortable.” I expect a lot of people who paid their $5.00 were thinking the same thing.

Bishop and a healthy-looking Allen walked on stage and seated themselves in comfortable living room chairs. Bishop began by saying, “I want to start by asking the question that is on everyone’s minds. I know you’ve had your ups and downs with this individual. Will Matt Hasselback sign on with the Seahawks?” The crowd erupted in laughter and it set the tone for the entire entertaining evening. Allen was charming and answered every question and those from the audience with candor, humor, and thoughtfulness.

When Allen was questioned about why he was putting Gates and Balmer in a bad light, he said it was necessary to do justice to his own story and neither has said the events mentioned in the book didn’t happen. (I read the reason these two were discussing limiting Allen’s ownership of Microsoft was not because they wanted to cheat him but as a legitimate concern they might lose control of the company to relatives, should Allen die from his cancer.) In any case, Allen, who implies in his book that he was under-appreciated, says everyone remains friends.

Bishop asked him about his yachts and his submarine. Allen spoke about descending 1000 feet down to the ocean floor. He said it was dark and there were really strange animals but when you put on some Pink Floyd, it was fantastic.

One can’t help be impressed with Allen’s consistent curiosity and creativity from the Experience Music Project to rocket ships and sport teams, despite his many failures. He said, “Maybe readers will learn from all the mistakes I’ve made.” Allen spoke about how his two bouts with cancer had changed his outlook and his actions. He got applause when he spoke about how his Brain Institute makes all their research available to anyone in the world for free and how important it was for him to leave a worthwhile legacy. And he introduced the first love of his life, Rita, who was sitting in the front row with her husband.
http://www.youtube.com/watch?v=bzEESpo81vY

It's becoming commonplace to have these “keynote conversations” with authors and celebrities. These are done in a relaxed manner and the expert doesn’t have to stress over preparing a formal presentation. You might suggest this approach instead of just a monologue for your next speech.

This doesn’t mean you don’t prepare for these “conversations.” The speaker still needs to thoroughly analyze and engage his audience. Allen called for a show of hands of programmers in the audience and then waxed poetic about solving code problems at 3 a.m. and asking them, “Isn’t that a great feeling?”

It’s critical to have a knowledgeable interviewer and to go over what issues need to be brought forth. At Town Hall, questions from the audience were solicited beforehand on cards. Bishop quickly chose ones that provided a lively discussion with Allen. It was a thoroughly enjoyable “conversation.” And thank heavens, not one Power Point slide!

Resourses: Nerve: Poise Under Pressure, Serenity Under Stress, and the Brave New Science of Fear and Cool by Taylor Clark. Anxiety is now ahead of depression as the most prevalent mental health issue in U.S. This book gives any examples of why and how some people thrive under pressure and some falter. Clark gives ideas on how to work through fears, whether for public speaking or just about anything else in life.
Posted by Jan D'Arcy at 2:43 PM No comments:

Maintaining a Professional Image Under Fire

"Momma says when you stumble, make it part of the dance." These words of advice were embroidered onto an old red velvet pillow I saw propped on a shelf in a run-down thrift shop. I recalled the saying when Kirstie Alley’s partner collapsed with a muscle spasm and she fell on him during her rumba on Dancing with the Stars. Alley picked herself up and finished the routine displaying remarkable gamesmanship. I tell my clients when they make some mistake during a presentation to keep going and incorporate the faux pas as if it were your own original, intended action. One of the most important human characteristics to keep us on the path is resilience, that ability to bounce back when faced with personal and professional disappointments.

A Japanese young man, who spent a summer with our family several years ago, has posting disturbing messages about the horrific earthquake and tsunami. Kazoo lives in Tokyo and has sent us emails about the rolling electrical blackouts, fears of radioactivity in water and food, and the dreadful numbers of dead, missing and the 160,000 homeless. The impressive resilience of the Japanese nation is evident but the continuing high stress levels are taking a heavy toll on the physical and mental health of this courageous population.

In this country, many friends and acquaintances are going through stressful economic losses or have suffered personal and professional setbacks. While these pale in comparison to the unimaginable disasters in Japan, they still can wreck havoc on our health and mental state and adversely affect our communications. We may have experienced an illness, an injury, a death of a parent or someone close to us, a job loss, the breakup of a relationship or a marriage or other traumatic event. We can respond in various ways to difficult circumstances. Some individuals will fold and give up while others thrive on turmoil and pursue their goals, no matter what landmines they have to walk through.

A lady friend survived a long bout with cancer and was resolute in her desire to go back to work as a professional speaker. I was in the audience the first time she made the enormous effort to pull herself together, be cheerful, energetic and deliver a thoughtful message. She struggled but kept going. She has gone on to have her own radio and TV show.

A current client lost everything in the destructive Liberian War in West Africa but was eventually able to bring his family to a new life in the United States. Despite harrowing experiences, Ezechiel Bambolo has written a book, The Firstborn Son, and is speaking to audiences about how this concept relates to the stability of the family and society.

Countless studies show that it is the interpretation or meaning that people give to stressful events, their belief in their ability they are never helpless and having a strong commitment to their objectives that help them through difficult times. I might add that many clients tell me their spiritual beliefs are their bedrock.

How do you react to stress in your life or unexpected circumstances when you arrive at a speech site (or job interview, meeting, networking group, etc.?) Murphy’s Law is operating at full throttle these days and you will need to expect and welcome change or be left in the dust. The ability to communicate effectively under stress is a skill that you can learn. We’ll talk more in our next blog about developing a productive attitude and techniques to be compelling even when you take a spill.

Resources: Made to Stick: Why Some Ideas Survive and Others Die by Chip and Dan Heath. Think you have a dull subject? Read this excellent book to help you make your ideas unforgettable.
Posted by Jan D'Arcy at 11:38 AM No comments:

Jan D'Arcy
Throughout my career as a coach for Presentations Skills, I've combined the two worlds of science / technology and performance arts. Over the past thirty years, I've studied brain research and countless ways for my clients to minimize the fear of public speaking. Formerly fearful clients report their "confidence has gone through the roof," whether making high-stakes presentations for million-dollar proposals, speaking at Radio City Music Hall, or acing a critical one-on-one job interview. Individuals and companies come to me to help them verbally and visually communicate complex information to audiences in a clear, concise way. I'm currently working on an ebook - an updated third edition of my book, Technically Speaking: A Guide for Communicating Complex Information. I'm looking for anecdotes from your presentations-how you prepare, how you responded to a difficult audience,etc. Recording a show for Imagination Theater this week and will post time of broadcast. I use practical, techniques from my extensive theatre, film, radio and television background to help my clients acquire stage presence and self-confidence. I have been blessed with fabulous clients!